I’ve been gone a while.  Away on writing leave … an introvert’s heaven! The first week away was like gulping at handfuls of cold water, most of it running straight through my fingers. The more I drank the more I understood how thirsty I was. I’m glad to say, too, that I made some good progress on ‘the book’.  Perhaps 2013 will be the year. 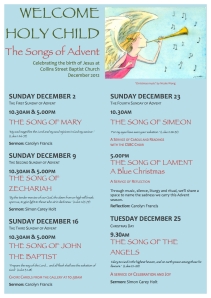 Now I’m back on deck, Advent looms.  It’s a great time of year. At Collins Street we’re drawing on what we’ve called the Songs of Advent, the hymns of confession and adoration offered by the witnesses to Jesus’ birth in Luke’s gospel. This Sunday we begin with Mary’s song, otherwise known as the ‘magnificat’ in Luke 1.46-55.

To stay with the theme, we’re also sharing together some of the songs of the season that are significant to us. Music is a powerful thing and its connection to this time of the year can run deep.  It certainly does for me. So I get to go first.

A song that really does it for me is one I only discovered a few years back. As it happens, it blends beautifully with this week’s gospel.  To be honest, I’ve never known what to do with Mary. She’s an enigma to me. And when I listen to the most popular retellings of the birth story I’m none the wiser. She is either deified beyond all recognition or left to play a bit part in a drama that leaves her essentially silent.

It’s why Patty Griffin’s ‘Mary’ was a revelation when I first heard it.  In a very simple way Griffin paints a compelling picture of the relationship between Jesus and his mother, one that began in a manger but grew far beyond it. What the song hints at is the unique role a mother plays in a child’s life, no matter who that child is or becomes.

‘Jesus said, “mother I couldn’t stay another day longer.”
He flies right by and leaves a kiss upon her face.
And while the angels are singing praises in a blaze of glory,
Mary stays behind and starts cleaning up the place.’

The song provides a glimpse of Mary neither deified nor marginalised. Her role in Jesus’ life didn’t stop in the manger and neither was her mother’s love defined by it. Ever in the background, her finger prints are on every page of Jesus’ story. Deification is completely unnecessary. Her story is sacred enough.

2 thoughts on “The Songs of Advent”